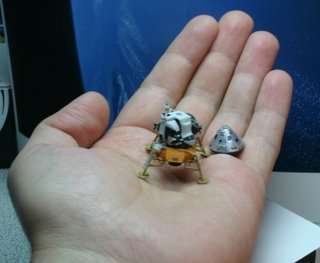 Introduction and basic story of Apollo 13:
This little craft (scale of 1:220), was constructed for the Starshipmodeler heroes contest. Here you will find some of the basic construction process stages. They are explain with the best of my ability, never the less, some detail work could be left out, so if you need more info, just leave me a note about it in the comments link below.
The Story: Apollo 13 was to be the third mission to land on the Moon. An explosion in one of the oxygen tanks crippled the spacecraft during flight, and the crew were forced to orbit the Moon and return to the Earth without landing. During the time it took to come back to earth, the lunar module "Aquarius" was used as a lifeboat. 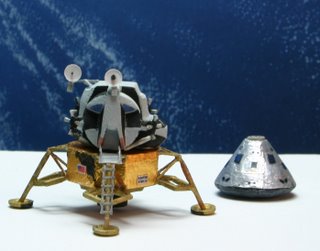 After having jettisoned the service module, there was only one thing left to do before reentry.

Unlike Odyssey, the lunar module Aquarius had no heat shield and was not designed to withstand the fiery plunge into the Earth’s atmosphere.
Before they could come home, Lovell, Swigert and Haise would have to say goodbye to the craft that had saved their lives. 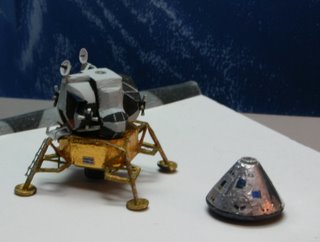 With Lovell safely inside the command module, the men sealed off the hatchway and then, with a mixture of sadness and gratitude, cast off the lander.

In Mission Control Joe Kerwin radioed an appreciation: "Farewell, Aquarius, and we thank you.

Forward to Stage 1a for the start of the construction process.

Wow! Those Models are FANTASTIC!

Thanks all for your kind words. I appreciate it.

Do you live in a really small flat so you haven't got any space for big models ? :)

Small house! Very Funny! Not really, I have a lot of room space. My taste in small had developed when I received from my grand mother a box of 4 little models to construct in matches, something similar to this http://www.jigsawjungle.com/
code/match/japbrdg.htm
Latter I used the balsa residue of an old Guillow airplane box. And the rest is history.