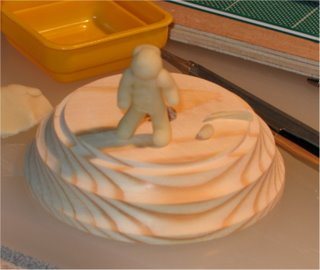 With the inspiration that Johnno's little astronaut gave me; I've decided to build one myself. You can go see Johnno's cool astronaut here !

The astronaut on the picture here was scrap back to a ball of compound. It was only built to test size and methods of modeling; I've never tried to sculpt such a small figure before. The wood base was turn onto a big lathe, its modeling surface is 5 cm in diameter, and it will be painted and varnish later.
Deferring from other sculptor’s methods, I've decided to use Sculpey III compound instead of the green epoxy stuff. The benefit of it is that you can work timelessly on your subject. 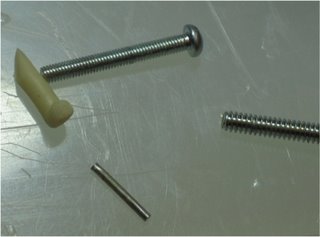 Here we can see the legs being molded, I've used different screws in size to emulate the front and the sole of the boots. 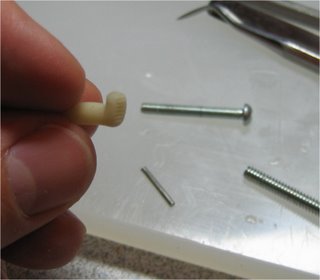 Sole of boot seen in closer detail. The sole print on the boot was only done to create a walking partern on the moon surface.